‘Reclaimed water’ via proprietary technology to allow for social reclaiming as a space for human activity at large scale. Plus Pool, was first proposed in 2010, it’s a floating pool with the ‘World’s First’ filtration mechanism to remove bacteria and contaminants through the concentric layers of filtration materials that make up the walls of the pool itself – leaving 9,000 square feet of clean, safe and swimmable river water in the pool.

“Like a giant strainer dropped into the river, + POOL is designed to clean up to half a million gallons of water every single day. The layered filtration system incrementally removes bacteria and contaminants to ensure nothing but clean, swimmable water that meets both city and state standards. No chemicals, no additives, just natural river water.”

Location to be determined – will be in East River close to downtown Brooklyn.  Final site selection is set to be announced later this year, and completion is set for 2019.+Pool (members

+Pool (members of Family New York and PlayLab), external partners helping with design (ARUP, IDEO, Columbia University etc.); little involvement from City though to scale it up; working to get permits etc. but ‘getting permission’ rather than partnerships. 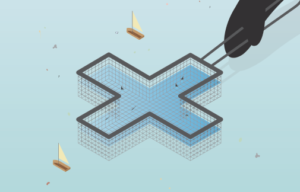