Times Square used to be gridlocked with yellow cabs and black S.U.V.s., it had no square — even though, for decades, pedestrians vastly outnumbered motorists passing through the area: 90 percent of the users were being squished into just over 10 percent of the area. This was also the case for cyclists who since the early 90s chose this same very spot in Times Square to raise their bikes over their heads and claim for safer bike infrastructure – bike lanes, bridge access and green infrastructure that most cities around the world already were enjoying.

Eventually, after much persistence, a big portion of Times Square is now an auto-free zone. The pedestrianization of Times Square was the flagship to get many of the city’s parks and plazas in far better shape than they were before, but reclaiming space alone is not sufficient to create the sort of vibrant public plaza we’d all like. That requires real stewardship. Civic culture needs cultivating and curating. Unless we do so, public space can become a public nuisance.

The Times Square Alliance was founded in 1992, it works to promote the creativity, energy, and edge that have made the area an icon of entertainment, culture and urban life. In addition to providing core neighborhood services with its Public Safety Officers and Sanitation Associates, the Alliance promotes local businesses; encourages economic development and public improvements; co-coordinates numerous major events in Times Square (including the annual New Year’s Eve and Solstice in Times Square celebrations); and advocates on behalf of its constituents with respect to a host of public policy, planning and quality-of-life issues. The Alliance is a 501(c)3 not-for-profit organization, accepts tax-deductible contributions, and is governed by a large, voluntary Board of Directors. 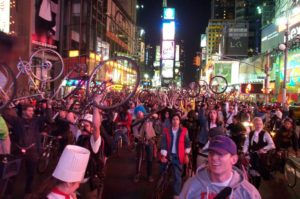