Umbrella House has come a long way from the late 1980s when a handful of squatters broke into what was then an abandoned city-owned tenement house and claimed it as their home. It was given such name by their residents who imagined it might function as a central hub for housing activists.

The building is now operated as a limited equity co-op and in accordance with Housing Development Fund Corporation rules, residents said. An agreement with the city specifies that buyers can earn no more than 120 percent of the median area income.

The building’s newest undertaking: an 820-square-foot vegetable garden tended by volunteers, which provides fresh produce and herbs for the 32 or so inhabitants of the 18 apartments, as well as a respite from some of the rigors of city life.

During the 1970s housing crisis, activists, punks, hippies, street kids and other homeless individuals took over and reclaimed derelict buildings on the Lower East Side through mass homesteading and squatting movements.

At the peak of these movements in the late 1980s, over 30 squats existed in the Lower East Side, providing homes for nearly a thousand people. The City has since granted many of these older squats limited-equity co-op status. Community members transformed buildings from a derelict state into livable. 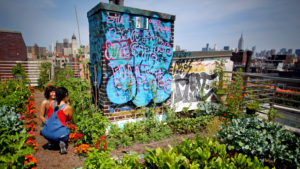