Brooklyn Bridge Park is not like other city parks. It exists only because of an extensive planning and community advocacy and it operates through a hybrid public-private model. After the close of its cargo operations in 1984, the plan was to sell that area for commercial development, but not-for-profit organization Friends of Fulton Ferry Landing fought for space and conceived the idea of the park.

A continuation of this battle is the constant conflict among private development and plans to establish affordable housing, which continues to divide neighbors and neighborhood associations. 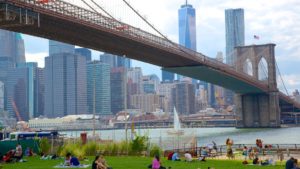